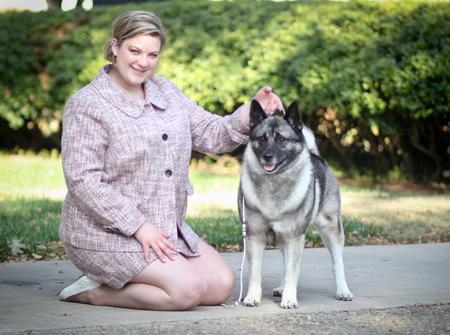 March 2010     In a competitive lineup at the NECGH Specialty Show in Houston, Cowboy received Best of Opposite Sex under Judge Douglas Windsor.  That same weekend he received Best of Breed under Judge Charles Olvis.  Cowboy was handled by Robert Chaffin & Terri Galle.

1-3-2009       After a summer and fall of winning 1st place in his class, Cowboy broke out in January 2009, at the age of 1 year old, with a Best of Winners Placement under Breeder/Judge Pat Huber at the Nolen River Kennel Club.

Cowboy finishing his Championship going WD and BOW at Fort Worth KC on 3-22-1009 at 15 months of age.

7-6-2008       Cowboy earned his first points as Winners Dog at the Trinity Valley Kennel Club under Judge John Shelton from the puppy class at 7 months old.

Cowboy going WD and BOW at the NECGH Specialty on 3-12-2009 under Judge Mr. Timothy S. Robbins.

7--2008       Later in July at the NECGH Sweepstakes Specialty Show, Cowboy was selected as the Best in Sweeps Puppy.

3-13-2009     Cowboy’s first 4-point major win came at the NECGH Specialty Show where he was Best of Winners under Judge Timothy Robbins.

3-22-2009     Cowboy earned the remaining points towards his Champion Title at the Fort Worth Kennel Club going Best of Winners under Judge John Shelton.

​6-27-2008     Cowboy earned his first ribbons at a dog show with his Novice Junior Handler Sarah Smithers in Oklahoma City.

7-4-2010       Cowboy wished Mandy a Happy Birthday & 4th of July with a Best of Breed win at the Oklahoma City Kennel Club under Judge Elizabeth Muthard.  Terri Galle enjoyed a great win with a lovely showing in the group ring at Oklahoma City and some amazing pictures in the arena. 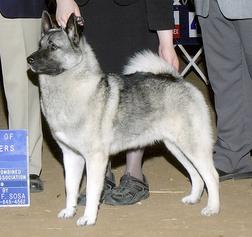 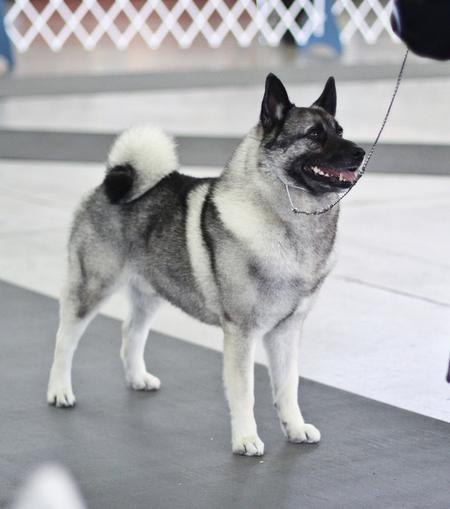 ​Our handsome Tinker/Country son--what type he has.  He is short backed, has nice bone, a lovely correct coat, full dentition, a tight center curled tail and he is a wonderful ambassador for the breed in all that he does with Sarah and Mandy.  They just keep exceeding our expectations for them.

Proudly Co-bred and Co-Owned with RiverWind by:

​Cowboy is at home with Sarah, Mandy, and Greg Smithers. 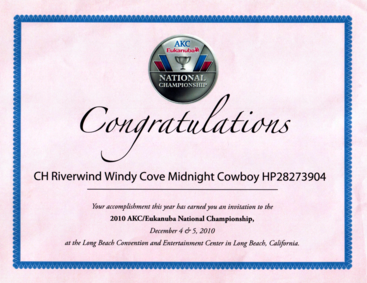 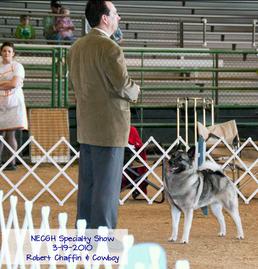 7-4-2010       Cowboy wished Mandy a Happy Birthday & 4th of July with a Best of Breed win at the Oklahoma City Kennel Club under Judge Elizabeth Muthard.  Terri Galle enjoyed a great win with a lovely showing in the group ring at Oklahoma City and some amazing pictures in the arena.

July 2011        In July 2011, the Reliant World Series of Dog Shows had a large entry of elkhounds who came from all over the country that included a specialty show and three days of all breed shows.  Cowboy won Best of Breed on the day hosted by the Houston Kennel Club from Judge Ronald Spritzer.  He received 3 more awards of Select Dog during this series of shows, including Select Dog at the NECGH Specialty Show.


12-17-2011   In an achievement of a lifetime, Cowboy was awarded Best of Breed at the AKC Eukanuba National Championship from Judge Gayle Bontecou.  Of course we were quite delighted with this placement and celebrated by watching the TV broadcast to see a glimpse of our dog shown by Terri Galle on TV!!


2011   Cowboy finished the 2011 year as the #4 Ranked Norwegian Elkhound and received an Invitation to Compete at the prestigious Westminster Kennel Club show in New York.  We were honored and entered the show.  We considered various ways to get Cowboy to NYC for the show, but in the end, we could not get him to the show.


4-22-2012     Sarah returned with Cowboy to the small show held by the Northern Arkansas Kennel Club in Harrison Arkansas.  Cowboy won Best of Breed both days and recevied a Group 3 under Judge Joseph E Gregory.


10-5-2014     Cowboy had great success at the Northwest Arkansas Kennel Club with 2 days of Best of Breed and a Group 4 from Judge Timothy Robbins.

10-3-2015     In October 2015, Cowboy received the Best of Breed out of the Veterans Class from Judge Dr. Anne P Gallant at the Norwegian Elkhound Club of Greater Houston specialty show held in Humble, Texas. 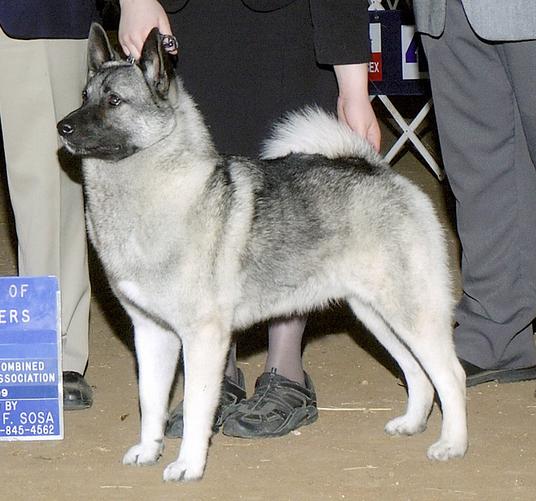 12-6-2009     Cowboy took the summer and fall of 2009 away from dog shows to grow up and mature.  He won his First Best of Breed at the Greater Collin Kennel Club under Judge Houston Clark and expertly handled by Robert Chaffin. 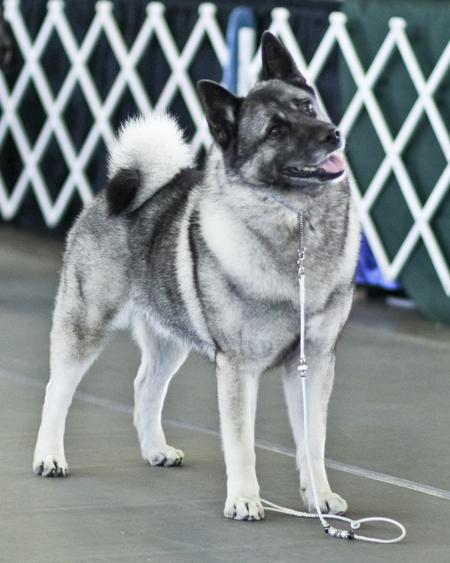 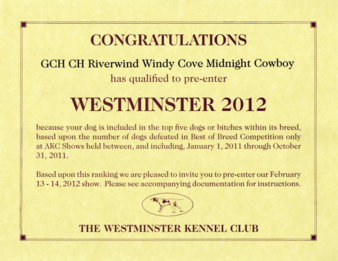