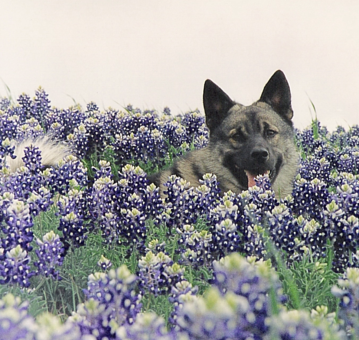 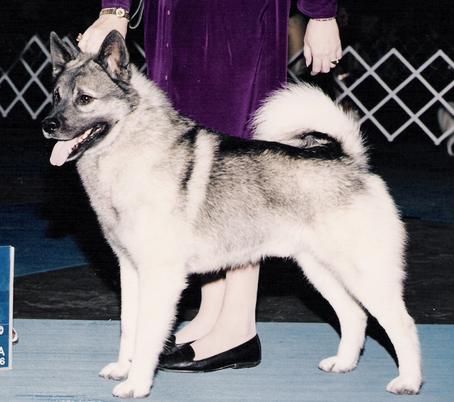 You know what they say, "Love a bear and he will follow you anywhere."  Well, CH Windy Cove Sugar Bear followed me everywhere--from the first day I met him he became my best friend.  He was born 1-14-1993 and lived to be 11 years old.  At our first meeting he was a fuzzy 6-month old pup just looking for fun.  What a silly, zany dog he was all his life.  "Bear was rarely seen at home without his big fuzzy green spider.  It was either dangling from his mouth as he bounced and pranced or was being used as a pillow while he caught a nap.  He knew all of his obedience exercises and agility obstacles--but he choose to do them only when he was not competing.  After all there were girl dogs to flirt with and new people to meet and greet at competitions--no time for serious stuff like "stay".

​He finished his championship in September of 1994 with majors from Breeder/Judge Paul Ross, Judge Robert G. McKeon and Judge Eugene Blake.  He had fun and success while being shown as a special.  He completed his Canine Good Citizenship requirements and enjoyed being a registered therapy dog for a couple of years.  Even after retining from the show ring he still wanted to go whenever he saw the suitcases and the loading of the car.  He usually settled fro a trip to obedience class or Grandpa Frank's house for breakfast.  Bear thought biscuits and gravy were Grandpa Frank's specialty.

​He was all the things an Elkhound is suppose to be:  Bold and energetic.  The pups were amazed at how fast the old dog could move when they irritated him or when he decided to start a game of tag.  A guardian of his family and home--he kept all birds, squirrels and cats out of the yard with great passion and lots of very loud barking--my police and FBI friends assured me that he was the best burglary deterrent available.  Silver and Black--gray and fuzzy--he gladly left some fur for you.  Friendly and intelligent--he is sure everyone wanted to pet him, play with him and share their food with him.  He was a bit independent of character--he always did it the "Bear" way. He was helpful--cleaning dirty faces, hands, and plates; he dried his fair share of tears; he watched hours of old movies and shared lots of popcorn; and he was a constant source of smiles and laughs.  Thank you Joe and Marie Peterson!!--My Windy Cove Sugar Bear was truly a blessing in my life.  He was my best friend--my "All American Bear".

Bear presented by Marie Peterson being awarded Reserve WD at the NEANC Specialty Show July 1993 at 6 months of age.

What a character he was--our wacky old dog!

Co-Owned with RiverWind by: